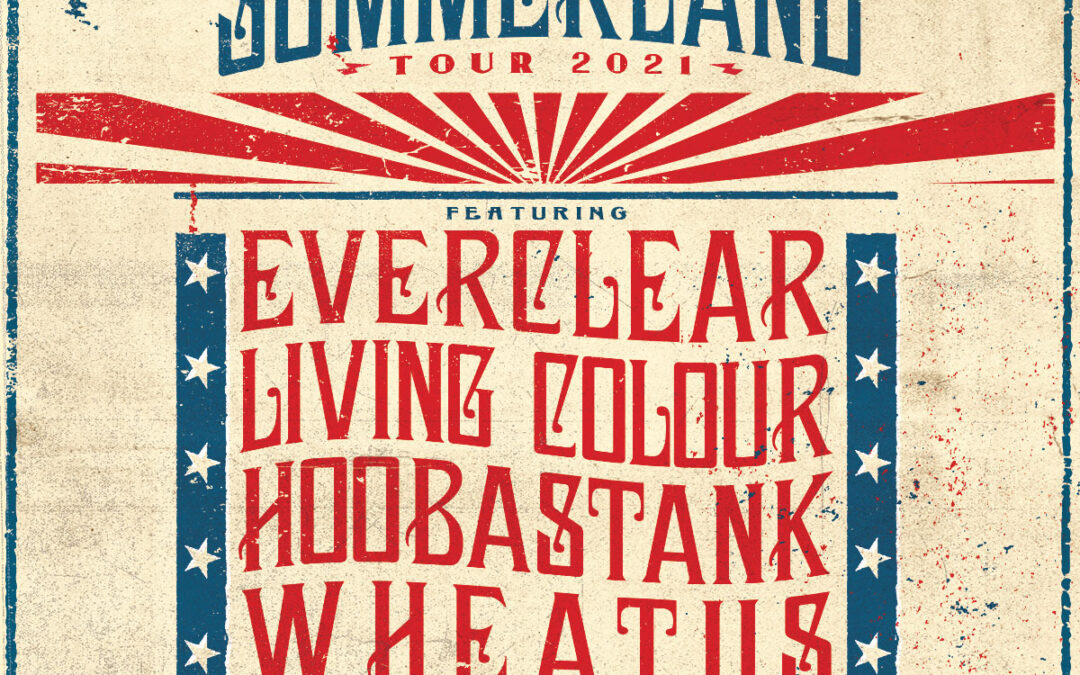 Sioux Falls, SD – The Summerland Tour 2021 featuring Everclear, Living Color, Hoobastank & Wheatus is coming to Sioux Falls at The District, Wednesday, September 15th, 2021. Tickets start at $29.50 plus applicable fees and are on sale Friday, July 9th at 10:00 AM. $25.00 dollar Early Bird tickets goes through the On-Sale Weekend only.

About Everclear
Considering Everclear has written and recorded some truly iconic ’90s alt-rock hits, it would be all too easy these days for the band to be a victim of its past successes, relegated to performing as a glorified jukebox, existing to satisfy the nostalgic cravings of Gen Xers everywhere. But singer-guitarist Art Alexakis isn’t about to start phoning it in now.

Although the band hasn’t released a new studio album since 2015’s triumphant Black Is The New Black, Everclear continues to tour actively. And while it’s a virtual surety that no Everclear
gig is complete without a rendition of “Santa Monica” and “Father of Mine,” lately the band has found that exploring the full range of past material—especially the “deep cuts”—not only gives
fans a rare treat, it also injects new life into the band’s live dynamic.

Formed by Alexakis in 1991 in Portland, Oregon, Everclear has enjoyed a lengthy career spanning 11 studio releases, numerous videos, thousands of shows and accolades that include a
1998 Grammy nomination. Like a true survivor, Alexakis has soldiered on through multiple lineup changes over the years: During the “classic” era, the band also included Craig Montoya
on Bass and Greg Eklund on drums; the current touring lineup features longtime members Dave French (guitar) and Freddy Herrera (bass), as well as drummer Brian Nolan (also with American Hi-Fi), who has performed with Everclear on multiple past tours.

Everclear spent May and June of 2017 touring in honor of the 20th anniversary of So Much For The Afterglow, the band’s massively successful sophomore major-label release. The 40-date run was an incredibly emotional and personally satisfying experience for Alexakis, who was able to perform obscure cuts from that time period for the first time in many years. Connecting with fans in that setting also reinforced the lasting impression the album has made.

About Living Colour
Living Colour is an American rock band from New York City, formed in 1984. Led by guitarist Vernon Reid, the bands lineup solidified in the mid-80’s w/ Corey Glover (vocals), Will Calhoun
(drums) and Muzz Skillings (bass). Stylistically, the band’s music is a creative fusion influenced by free jazz, funk, hard rock and heavy metal. Their lyrics range from the personal to the
political, in some of the latter cases attacking Eurocentrism and racism in America. The band’s debut album, “Vivid,” was released in 1988 on Epic Records. The album reached #6
on the Billboard 200 Albums chart and was later certified double platinum by the RIAA. It featured “Cult of Personality,” a #13 hit on the Billboard 200 Singles chart as well as the Top 40
hit, “Glamour Boys.” “Cult of Personality” went on to earn the band their first Grammy Award for Best Hard Rock Performance.

About Hoobastank
Sometimes even a multi-platinum band with three GRAMMY nominations under their belt needs the kind of pop talk which helped inspire Hoobastank’s sixth studio album, Push Pull,
their first since 2012’s Fight or Flight, and debut for noted rock independent label Napalm Records.

“We never stopped exchanging musical ideas,” says vocalist/guitarist Doug Robb, who cofounded the band with high school classmates, Dan Estrin and Chris Hesse, almost 20 years ago
in Agoura Hills, CA, a suburb of Los Angeles he still calls home. “We waited until we had enough material to start recording an album. We love creating music, even if no one else ever hears it.” Push Pull, so named for the power struggles and codependency that goes on within any long term relationship–including, but not only, marriage and a rock band–was produced by longtime pal (but first-time collaborator) Matt Wallace at his Studio Deluxe facility in the heart of the band’s San Fernando Valley turf. Sifting through the musical demos provided by both Estrin and bassist Jesse Charland (a band member since 2009), then Robb’s lyrical and melodic ideas, Wallace provided not just the requisite encouragement, but the creative midwifery, which set the wheels in motion for the album. The result nails a bull’s-eye to the underappreciated ‘Stank’s sweet spot–the large-scale, muscular ‘80s-‘90s alternative rock of U2, Duran Duran, INXS and even Tears for Fears, whose “Heads Over Heels” gets a brawny, Bowiesque take on the new collection.

About Wheatus:
Wheatus is a seven-piece rock band based in New York. Since their hit single ‘Teenage Dirtbag’ in 2000, the band have worked independently, releasing multiple singles, recording six
studio albums and touring every year. In addition to recording their seventh album, the band is currently working on a twenty-song, 20th anniversary edition of their debut self-titled album, scheduled to be released in August 2020. The re-recorded version will be supported by tours of Australia, Europe, the UK and the USA.

For more information about The District visit:
https://thedistrictsf.com/