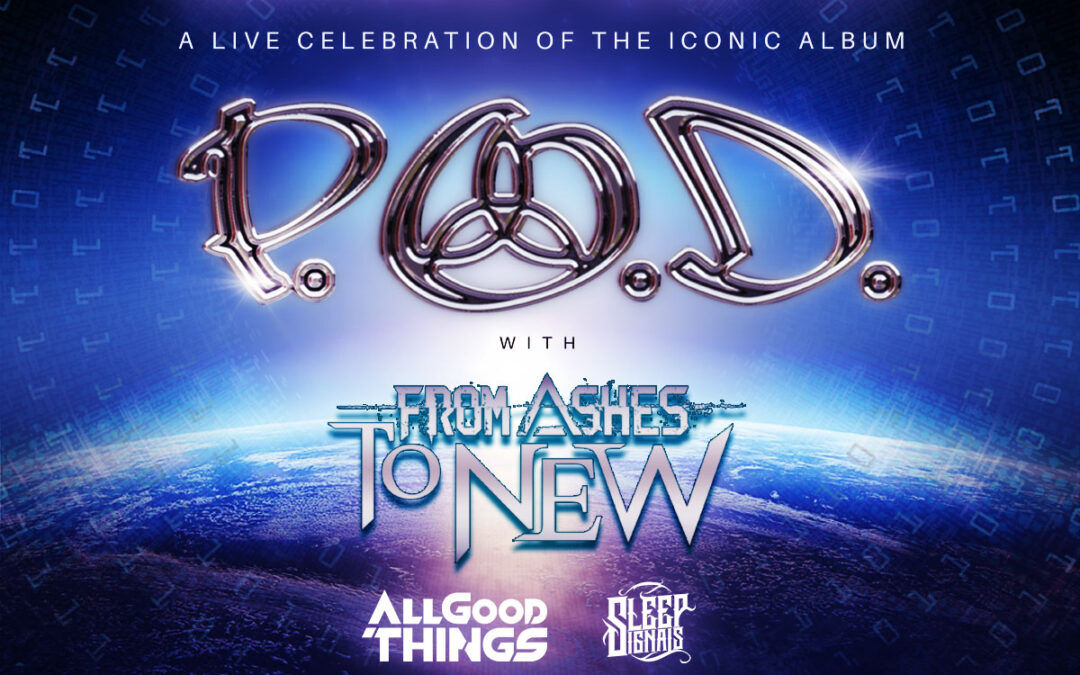 About P.O.D
P.O.D. (Payable on Death) formed in San Diego, CA, in 1992, and have since charted their own course with worldwide sales exceeding 10 million, hugely successful international tours, and a series of chart-topping radio hits. Over the span of two decades they have released eight studio albums of original songs – including the triple-platinum Satellite – seen chart success
with more than a dozen Rock radio hits, including “Southtown,” “Alive,” “Youth of the Nation,” and “Boom,” the Active Rock hit “Beautiful” and their No. 1 single, “Lost In Forever,” received three GRAMMY Award® nominations, and racked up four No. 1 music videos. The band has also contributed songs to numerous major motion picture soundtracks. P.O.D. is
Sonny Sandoval (vocals), Marcos Curiel (guitar), Traa Daniels (bass) and Wuv Bernardo (drums). The members of P.O.D. are also active members of a tight-knit music community, collaborating on their own records as well as others’, including Katy Perry, H.R. (Bad Brains), Mike Muir (Suicidal Tendencies), Sen Dog (Cypress Hill), and more. P.O.D. released their
ninth studio album, The Awakening (T-Boy/UMe), on August 21, 2015.

About From Ashes to New
In the 7 years the band has been together, fans have come to expect empowering messages delivered via the band’s unique blend of metal, hip-hop, rock and electronica. The songs on Panic aren’t just catchy, they also contain a sense of urgency that is as inspiring as it is innovative and offers a moment of intense clarity in a world grown cloudy. Panic features the same lineup as the band’s 2018’s breakthrough releases The Future — vocalists Brandyberry and Danny Case as well as guitarist Lance Dowdle and drummer Matt Madiro. Brandyberry credits the undeniable musical magnetism of these eleven songs to the enduring lineup. “The chemistry between us is there and fans who have seen us recently have been very vocal about the fact that we are firing on all cylinders.” That unified feeling which was solidified on the road performing songs like the Billboard-charting single “Crazy,” enabling the band to further refine their sound and move creatively to the next level. “We know what our vision is, and we know what we want to do, so we were able to really accomplish that on this album because the structure is there,” he adds.

About All Good Things
If All Good Things was not a band, it would be necessary to invent them — and in fact, that’s just what happened. In a masterful feat of reverse-engineering, the five members of this Los Angeles-based collective have become a potent musical force in almost the exact opposite fashion from how most groups get their start, bypassing the traditional “this is how the band got together” storyline in favor of an origin story more dynamic, more contemporary and very much in tune with how music is discovered and consumed two decades into the 21st century. As the band readies the release of its Better Noise Music debut, titled A Hope In Hell, All Good Things is perhaps sitting in the best possible position a rock outfit can hope for. Its monumental music has been featured in TV (Bones, Criminal Minds, Vampire Diaries), film, gaming (Mortal Kombat) live sporting events (WWE) and advertising all over the world.

About Sleep Signals
Founded in 2014, the band hid the road in early 2015 and has since placed over 400 shows in 45 states! 2021 will see the release of the band’s new album, featuring the single, “Fireproof,” which experienced the band’s first commercial radio success. The single was featured on Sirius XM’s Octane and received spins on 80+ US FM radio stations, spending 11 weeks on the Billboard Active rock radio chart.