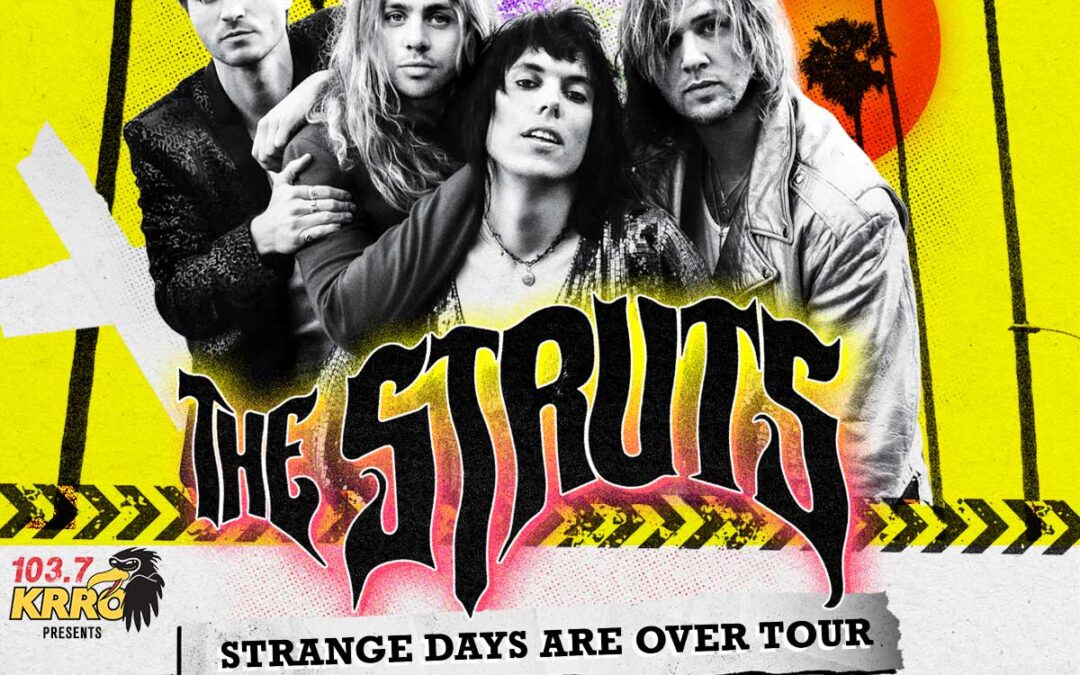 SIOUX FALLS, SD – The Struts are bringing their Strange Days are Over Tour to The District in Sioux Falls, SD on Wednesday, October 20th. Tickets for the show start at $32.50 plus
applicable fees and are on sale Friday, June 25th at 10am.

About The Struts
The third full-length from British rock band The Struts, Strange Days came to life over the course of a charmed and frenzied burst of creativity last spring. After getting tested for COVID-19, singer Luke Spiller, guitarist Adam Slack, bassist Jed Elliott, and drummer Gethin Davies all moved into the Los Angeles home of Jon Levine, a producer who worked extensively on their acclaimed sophomore effort YOUNG & DANGEROUS (including the album’s chart-climbing lead single “Body Talks”). Within just ten days of couch-crashing at Levine’s house, The Struts had laid down nine original tracks and one masterful cover of a KISS B-side: a lean, mean body of work that amounts to their most glorious output to date.

In an organic turn of events for a band massively embraced by some of rock-and-roll history’s greatest icons—a feat that’s included opening for The Rolling Stones, The Who, and Guns N’
Roses—Strange Days finds The Struts joining forces with a formidable lineup of guest musicians: Def Leppard’s Joe Elliott and Phil Collen, Albert Hammond Jr. of The Strokes, Tom Morello, and Robbie Williams. Mixed by Claudius Mittendorfer (Panic! At the Disco, Arctic Monkeys, Johnny Marr), the result is a powerhouse album that lifts The Struts’ glammed-up
breed of modern rock to entirely new and wildly thrilling heights.

About Pepper Entertainment
Established in July of 2006, Pepper (PE) is based in Sioux Falls, SD. As one of the fastest scaling, independent promotions company in the Midwest, PE, collectively, exceeds 25 years of
experience spanning a broad scope of industry specialties, such as; Live Promotions, Corporate & Private Event Talent Buying, Club & Performing Art Center Programming & Media &
Marketing Services. More info is online at www.pepperentertainment.com Tickets will be available at www.etix.com, www.pepperentertainment.com, and
www.thedistrictsf.com.