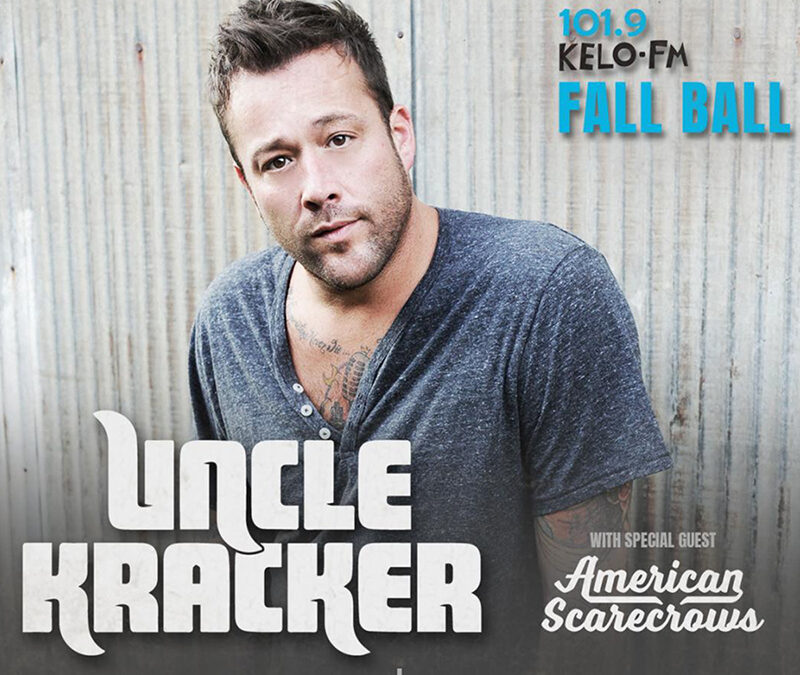 Uncle Kracker
No matter what he does or where he goes, Uncle Kracker adheres to a simple, yet rather timeless philosophy. “I really subscribe to this mindset of just having fun,” he affirms. “That’s what it’s always about. It’s the train that I’m forever on. The way I feel is if I’m enjoying it, it’s really worth doing.” Now he’s having more fun than ever. And it certainly shows with the recent release of his single “Floatin’.” The feel-good track recorded in Nashville couples Uncle Kracker’s heartfelt, infectious lyrics with a country groovethat will keep fans smiling.

Uncle Kracker will be showcasing his tried and true hits along with some new tunes in sheds across the country. His live show continues to get bigger and better with every tour. “It’s very interactive,” he says. “It’s meant to be a party, and I want everybody involved. Each time we go on stage, I want people to leave smiling.” That outlook has served him well over the years. After vaulting to stardom as a charismatic presence and chief collaborator in Kid Rock’s Twisted Brown Trucker Band, the Michigan singer, songwriter, and performer, also known as Matthew Shafer, kicked off a stunning solo career of his own.

His 2000 major label debut, Double Wide, fittingly went double-platinum and yielded #1 smash “Follow Me”. Its 2002 follow-up No Stranger To Shame reached gold status and spawned cross-format hits such as “In A Little While” and the powerful cover of Dobie Gray’s “Drift Away” which set a Billboard record for most weeks at #1 on any chart, topping their #1 run on the Adult Contemporary radio charts for a staggering 28 weeks. Before Uncle Kracker flew up the charts for 5 weeks at #1 with “When the Sun Goes Down”, a duet with good friend Kenny Chesney, country music might’ve seemed an odd place to find the Detroit-based good-time Kid Rock alumni. But after a few summer tours with Chesney, Uncle Kracker reached country’s Top 10 with his double-platinum crossover hit “Smile”. Then, 2012 saw him fully embrace his country side with his critically acclaimed fifth outing, Midnight Special produced by Keith Stegall which leaves no doubt this feel-good rocker is exactly where he should be.

American Scarecrows
Listening to American Scarecrows’ music feels like late nights spent with your friends in hopeful revels, reflective pangs, and vulnerable heart-to-hearts. The Minneapolis trio – singer-songwriter Seth Davin on guitar backed by the rhythm section of Allen Maier on drums and Matthew Broadbent providing the low end – matches their storytelling with an indie-pop sensibility, rounded out with tastes of folk-rock, country, and Americana. Their straightforward pieces greet listeners with evolved emotions and earnest solidarity. Bassist Broadbent spent years touring with Somerset (Epitaph/Punknews Records), while Davin and Maier logged many miles touring across each of the lower 48 as half of Dropping Daylight (Sony/Octone). Now the band is reuniting after a three-year hiatus to share the next chapter of their story with the Minnesota music scene and beyond.

• The Alliance, a 501(c)3 non-profit corporation, brings a state-of-the-art entertainment venue unlike any other in the nation, including a full event venue (lights, sound and a unique platform), the Patriot Grill, Club Lobo Lounge, VIP Suites, upper and lower-level seating, Armory Gun Range, IMPACT Coffee, Heritage Theater, and much more that you have to see to believe.
• Washington Pavilion Management, Inc. is proud to be providing the Alliance with expert show production, unique box office services, and a passionate staff of experts in sound, lighting, and event management.
• Pepper Entertainment, a Sioux Falls-based business, is one of the fastest scaling, independent promotion companies in the Midwest. Pepper has over 25 years of experience spanning a broad scope of industry specialties, such as Live Promotions, Corporate & Private Event Talent Buying, Club & Performing Art Center Programming and Media & Marketing Services.