Offstage and On the Record with Bill Stevenson from Descendents 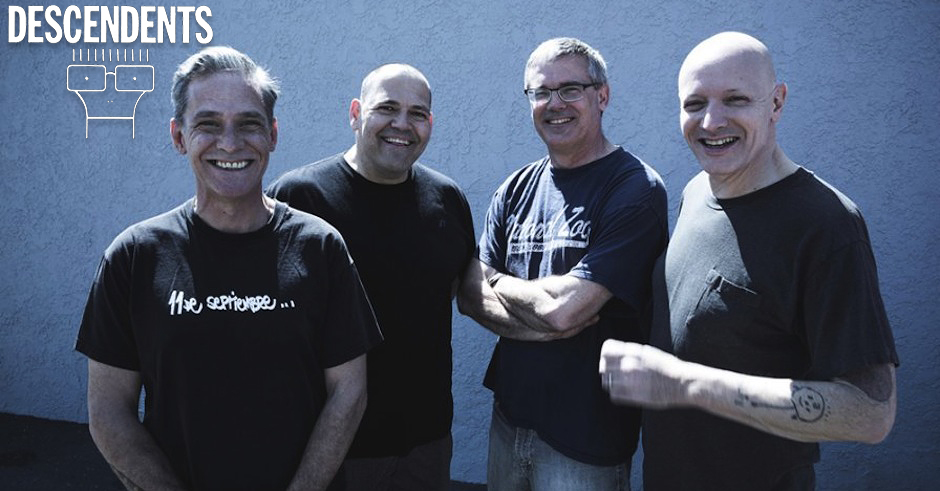 After an extended summer break — we’re bringing the interviews back!  Our latest interview is with Bill Stevenson, co-founder and drummer of Descendents.

For all of your brand-new fans who aren’t familiar with the history of the band, could you sum it up in a 30-second little blurb?

Oh boy. (laughs) We started our band when we were 15 years old and we play a kind of a “chainsaw pop.”  So, it’s like — kind of loud guitars, but with melody.  But by a band that drank way too much coffee. That was 30 seconds, right?

I wasn’t timing, but was pretty close!  You guys have a pretty long history.  The most recent album you have is Hypercaffium Spazzinate?

And that was 12 years after the previous one?

Let me think about that… that was… yeah, yeah. (laughs) We do a record every 10 years whether we need it or not. (laughs)  Yeah, we just kind of do records when we feel like it as opposed to, I guess, the conventional schedule these bands get on, as they do an album like every two years or so.

We always feel like the songwriting quality suffers when you try to put out that many records all the time. There’s a saying that says you have your whole lifetime to write your first album and then you have a year and a half to write all the other ones.

But that’s not your guys’ style?

Yeah, we don’t really — We just do it whenever we have a bunch of cool songs.  We’re recording now. We’ve recorded a bunch of songs already. I was just at Milo’s house last week and we were recording vocals out there.

So, your writing process actually started long before you recorded that album then?

Writing is kind of ongoing for us. It’s not blocked into like, “okay the touring cycle is done, now let’s start the writing process.”  Writing’s kind of always happening whether it’s just on the ukulele on the bus, or you know in your head, or a little thing you sing into your voice memo on your iPhone.

It’s kind of – you’re always thinking, you know, the brain’s always active, so the songwriting is always stirring around.

What’s it like when the band comes back together after so long apart to record the album?

Well, okay. So, with our band, even though Descendants itself has taken some fairly big hiatuses, the three of us — Karl, Stephen, and I — we’ve always been functional with our kind-of sister band or cousin band [ALL], which is all three of us, but just with a different singer.

The Descendants has never like broken up, or there’s never been this thing where… you know, there’s disagreements or arguments. We’ve always been the best of friends. We’ve always been together. We just go through periods of times where we’re inactive, but we’ve been active now for the last nine years straight.

You were credited with writing five of the songs on Hypercaffium Spazzinate, one of them being “Victim of Me,” and that was the first single released. How did you guys determine that would be the first single?

So that one, I wrote the lyrics and the melody, and Stephen wrote the music. So, Stephen and I kind of collaborated on that.  And as far as choosing singles and stuff, we don’t really think about that stuff, that’s more for — I don’t know, record labels or other people. We just kind of focus our energy on writing the music and playing the music and enjoying the music, and then we let the label or whoever worry about trying to market it or sell it or try to determine what’s a single.

To me they’re all singles or none of them are singles. We wouldn’t put a song on our album if we didn’t think it was worthy of being on there. So, then to try to say “well, this is the best one,” that’s for someone else to choose, I think.

We just don’t really judge it. We just create it.

Another song you wrote lyrics for that struck me was “Beyond the Music.” You know, a lot of bands have conflict and they go through tough times, but from the lyrics of that song, it sounds like you guys just couldn’t be any closer.  Is it always that blissful with your band?

We’re like four brothers. So, there’s ups and downs, and sometimes with a sibling they do something that you really hate and you just, you’re just really mad at them, but they’re your family.  So, you move past it. We’ve managed to be friends for… let’s see…  it’s been Karl and Stephen and I and Milo — it’s been the four of us now since ‘86. So that’s 33 years, almost 34 years that’s been the four of us.

So, it’s all based on friendship. It’s not like we stick with each other out of mercenary concerns or whatever it is. We are each other’s best friends.

So, how did you and Milo get hooked up with Karl and Stephen then?

So, the real short story is – OK well first of all, we had lineup changes in the early, early years — various lineup changes. So after one of the long touring things — we did like a three and a half month tour — and when we got back from that tour – and these were pretty grueling tours with like no hotels, no bus, just sleeping on people’s floors, and making zero money; making like a $5 a day per diem just to get a hamburger or something and just enough for gas money. And when we got home from that long, long tour, Doug and Ray both quit, they both just quit. And so then we didn’t have a band, but I always look at those times as opportunities. And so Karl got wind of it that we were looking to get a new bass player and guitar player. He came out to LA and we jammed with him, and we really liked it and he goes, “hey, my best buddy could play guitar.”  And so “yeah, well get him out here, let’s try it too.”  So, then there we are. We were paired up, two sets of best friends. (laughs)

After the last album came out, Descendents went on tour shortly after it was released.   Was it an adjustment to get back out on tour again?

Well, as I had mentioned, Descendants have been playing shows now for nine years straight. These days being that we’re all in our mid-50s and we all have families and that sort of thing, these days we don’t go out on the big long gruelers. What we do is we kind of chip away at it all year.  So, we go out and play a handful of shows, and then we come home for a couple weeks and lick our wounds (laughs), and then go back out again for another handful of shows. And we’ve been doing that now for nine years straight.

So it’s definitely a change from the early days.

Oh couldn’t be more different, because plus now people like our band.  I mean (laughs) back in the day we were just doing it just to do it, (laughs) because the thought of making a living from it was not in the horizon.  We didn’t think there was a possibility to make a living for it. We just wanted to do it, because we felt the need to write our songs and play our music and do our thing.

So, for years we didn’t even have anywhere to sleep. I mean at all, no homes, no apartment, no house. We just slept on the floor of our practice room. We didn’t even have hot water or a shower.  We did that for years, but it’s not like a starving artist thing. I mean, we just didn’t care.  We wanted to play our music and we weren’t going to go get some job at McDonald’s or whatever it was, you know?

Descendents will be here in Sioux Falls on October 11th. What should concert-goers expect at the show here? Do you play a lot of music from Hypercaffium Spazzinate or do you play from each of your albums?

I think we do a real good job of representing all of the material – to represent material from every release.  Certainly, it’s not an equal thing. We don’t do the exact amount of songs from each album. And we do maybe play a little bit more of the new ones than we do on certain albums, but I think we play more songs from Milo Goes to College and from the new one, and then we play maybe a little bit fewer songs from Everything Sucks, and then a little bit fewer from I Don’t Want to Grow Up, Enjoy!, and Cool to Be You.  But we don’t abandon any era. Yeah and we play songs from the Fat EP too. We still play My Dad Sucks and we play Global Probing and Hey Hey, those are from the Fat EP, way back when. Yeah, we try to play all of it.

Because our songs are short, and we don’t really sort of hang out and talk and loiter on stage between songs, we just kind of play — go from song to song – we can fit a lot of songs in. If we do our normal show, plus an encore or two, that could be upwards of 35 songs. So whatever song people came to hear, they’re probably going to hear it. (laughs)

How about anything new that you haven’t recorded yet?

We haven’t been playing any unreleased ones yet. Because we’re not even really done recording them, we’re kind of still working on them.

Do you guys have a timeline of when you might have another album release?

I think we’ll have this one… I’d like to think we could have it finished in a year. I’m kind of lagging. I haven’t written very much yet. Stephen and Milo have written a lot, and Karl and I haven’t written as much yet, but we’ll catch up. With our albums, it’s usually everybody writes about a quarter.

Have you been to Sioux Falls before?

I’m pretty sure we have, but I have no idea when — I don’t know if Descendents have, or if ALL has or what. Because ALL did maybe a lot more, just exhaustive touring of every little nook and cranny. Descendants did every nook and cranny in 1986. That’s the one when everybody quit the band afterwards, because we played like every — every single town in the whole country. (laughs) I’m pretty sure we’ve been there, but I can’t remember when.

I suppose — especially the early touring — you wouldn’t have gotten to get out and tour the town or anything. Do you get to do that now, on these current tours you’re on?

Do you have any ending comments for your fans coming to see you at The District?

If you enjoy fun concerts, don’t miss this show!  The Descendents, along with special guests Joyce Manor, Night Birds, and Lost Harbor will be at The District on October 11th – get your tickets here.